Googling about the Cello Suites, I found a delightful passage, in a book written solely about those suites.
The young Bach, 18 years old, at his first job, got into a scuffle with a bassoon student by the name of Johann Heinrich Geyersbach. Bach apparently called him a "Zippel Fagottist", the exact translation of which seems to be in dispute, but certainly seems to be a slur. Geyersbach took exception, weapons were drawn (each side claimed the other drew first), and they scuffled until separated by other students. The town council reprimanded him, telling him that "Men must live among the imperfecta". He later got into trouble for taking extended leaves, playing weird notes, playing too long (and then too short!) in church, and sneaking a "strange maiden" into the organ loft. Huh. Regardless of Zippel Fagottist, the Suites work pretty well on bassoon. I should try them, one of these days.
Posted by TFox at 5:32 PM No comments:

Here's the new button on my ultrasonic cleaner, mostly installed by my son. The old one failed, as I mentioned earlier. The new one is working fine, so far, and it should be more reliable than the original, since the connection doesn't go through the hinge. However, the cleaner was out of commission for a couple of weeks while we got around to doing it. This gave me a chance to see if the cleaner is actually doing any good, or if zapping reeds in this thing is just another waste of time. And, well, I guess I expected my reed to start getting cruddy eventually, but I had no idea how fast. Within a couple of days, a layer of slime had started to build up on the back of the reed. Gross! Is this what the rest of the world is putting up with? Me, I started to try and scrub my reed under fast hot water after every use, and I'm glad to get my cleaner back online.

A couple of funny things happened recently. I'm hoping they'll lead to improvements, in the end, but it sure doesn't feel like that in the moment. One was getting spanked about intonation in the university orchestra. It caused me to spend a fair bit of practice time, with a loud drone from my ipod, doing slow bends above and below the note, listening for beats and learning to tune perfect intervals. I'd kind of thought that I already knew how to play more or less in tune, but apparently not. The interesting part is that I started listening a little more critically in my usual orchestra. What I discovered is that, yes, I was often pretty badly out of tune there too. I'm not the only offender, and yeah, sometimes it was hard to find a pitch centre because of disagreements in the group, but most of the time, there was a pitch and I wasn't on it. Painful for the self-esteem, but recognizing that I have a problem, even if I'm not able to fix it instantly, is the first step on the path to improvement. Hence the tuning practice. It's kind of funny, how different the pitch adjustments can be for even very close notes. I like Betsy's admonition that this is training the bassoon to play in tune, rather than the player; this is much easier on the ego.

The other funny thing came from doing some recordings. I'm getting tired of hearing the same thing at my lessons constantly: go across the bar line, crescendo the last sixteenth, make it sound like a pickup, that kind of thing. It's the kind of thing that Once I had the first couple of bars of a study ready, really doing that kind of phrasing, I recorded it on my ipod, so I could enjoy the pleasure of listening to how wonderfully I was doing it. Didn't work out that way. It was terrible! I wasn't doing it at all. Apparently my teacher has been going on about the same thing for years, like a broken record, because I've been consistently making the same mistakes, like a broken record. So that's kind of interesting. It's also interesting how much of this phrasing you can see in the sound contour on the recorder. The note that's smaller than the rest is actually  quieter, and breaks the phrase. If you want the downbeat to sound like a downbeat, it has to be louder than the pickup, which means the wave has to be bigger. With much struggle, and many recordings, on extremely simple music (I'm working on the first movement of the Telemann sonata), I've been able to make a bit of progress. Sometimes it's really hard: it's like there's something wrong with my brain, and it's afraid of playing certain notes. And I've discovered that some notes are much louder or softer than even very close notes, so in order to make the wave look pretty, I've got to blast out certain notes in what feels like a very unnatural manner. But the recording doesn't lie, and I had to admit, when I got it right, it sounded better. So again, just recognizing that I have a problem is hard. I can't hear it when I'm playing, I've got to be told. Or listen to a recording.

Here's Telemann, my first attempt to overdub to do the bassline too. Sorry about the metronome, but it seemed like the easiest way to sync on a one-track recorder. And of course, I was so distracted by dealing with the technology, that I wasn't able to do any of the things I'd been practicing. Ah well.
telemann by TFox17
Posted by TFox at 12:12 PM No comments:

I started a thread on Reddit,  asking for suggestions for 21st century classical music to listen to. It's not that I've listened to, and become bored of, everything that's been written in the 20th century, or any other century, rather it's just an excuse to find some new music. Many people responded, and I collected the ideas, found links to samples where needed, and put them all in alphabetical order. (I'm like that.) I haven't had a chance to listen to much yet, but I will.

I have three shows in the next few days, I guess it must be Christmas. One is chamber music, a noon-hour fundraiser. Another is a senior's concert with my main orchestra, the first of our two Christmas shows. It'll be fine, my main concern is that I'm still looking for another bassoonist for the second show a week later. The third is tomorrow night, sitting in with one of the other community orchestras in town. I only got asked to do this on Tuesday, so I'll be doing the show on zero rehearsals. Even if the music is easy, and the standards are low (they must be, or they wouldn't ask me), I think I'd still prefer to have at least one rehearsal under my belt. I'm a decent sight reader, and some of the music I've seen before, but still, I never know what the tempos will be, is it in two or four, are those repeats good, where does that DS go back to. I'll be the only bassoonist, so there won't even be anyone else to lean on, but the multi-instrumentalist who asked me will be playing clarinet next to me, so hopefully she can keep me on the right page. I shouldn't feel too sorry for myself, though. Whoever I find for the second show next week will have to do the same thing.
Posted by TFox at 8:37 AM No comments:

I love my ultrasonic cleaner, and have been using it daily since I got it almost two years ago. Unfortunately, in the past few weeks it's started to get unreliable: press the button, nothing happens. Try a few times, and usually it'll work, especially with jiggling. Sounds like a wonky connection, but where? I had a couple of ideas: one, that leaving it full of water all the time, in defiance of the instructions to empty it after use, caused something to corrode somewhere. (I'd change the water/soap about once a week, or if I thought it was getting grody.) Or, noticing that the buttons were located on the hinged lid, maybe something having to do with the hinge. Tonight I took it apart. Here are some pics:

View from above, with the lid more or less in place. I've removed the smoked plastic insert which keeps dust out. You can see the buttons on the bottom of the picture, and the hinge on the top. It's a little ajar, since I've already started taking it apart. Also visible is the entirely pointless blue LED light for the chamber. 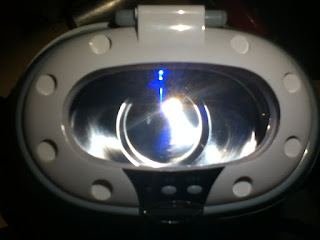 With the top piece removed. The wire harness connecting the switches and the blue LED comes out of the hinge at the top. No wait: the wire harness, carrying delicate wires without which the machine won't work, *is* the hinge, or one side of it anyway. Oh my goodness. I'd wondered how they'd arranged to avoid stressing those connections inside the moving hinge, there are ways to do that, no doubt. But not only did they not bother protecting the wires, they used the wires themselves as a structural component of the hinge. Probably durable enough to last for the one year warranty period, and no doubt flimsy enough to ensure that it wouldn't last much longer. Kind of a Chinese version of planned obsolescence. The thing is, putting the switches on the lid is totally unnecessary: they'd have worked fine fixed on the body, which would have avoided running wires to the top. The only requirement for a wire to be located up there is for the useless blue LED, whose primary purpose is to make the gadget look "techno" in marketing photographs. 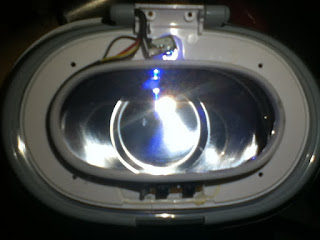 Just for fun, pics of the bottom interior. The big piezo attached to the chamber bottom is the main thing here. 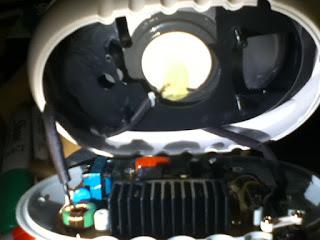 And the circuitry. At the left there are two big transistors attached to a black finned heat sink, this heat sink has a cutout for it which lets it rest near the chamber bottom. The circuitry and the piezo dump enough heat into the solution to get it warm during use. Whether it's just a convenient place to put the heat, or if it's an intentional design allowing the solution to warm to aid cleaning, I'm not sure. You can also see a fuse, a nice feature in an electric gizmo that's around water. In addition to driving the piezo, the circuit has to recognize the on and off switches, and has a timer, to let it buzz for three minutes before stopping automatically. At the bottom is where the wiring harness comes in. If I was going to jumper a new switch in, I guess I could do it there. 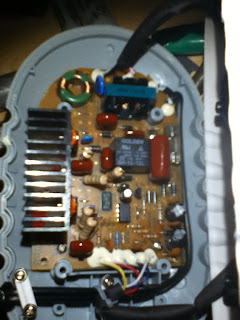