I didn't know you could patent a bocal bend. But apparently you can. Trent Jacobs mentioned that only Wolf is licensed to do the Grundmann bend, so I went looking for the patent. Here it is in German, and Google shows an English translation. The bocals themselves are available from MMI.
Posted by TFox at 8:01 AM No comments:

The scoop on ivory bell rings

MMI recently replaced an ivory ring on a 12k Heckel with synthetic, due to concerns about its salability. Pictures here. So what's the deal with ivory these days?

Well, the full story is a little complicated. Wikipedia has an article on the Ivory trade, with some history and mostly focusing on elephant ivory. Continued poaching of elephants has led to increased regulation and enforcement of their products. Here are the rules surrounding ivory in the US in 2014. Import, export, interstate movement, and use of African elephant ivory ranges from "maybe okay under restrictive rules" to "banned, item destroyed and maybe even go to jail". So what do you do if you have a bassoon with an ivory bell ring?

The first question is what kind of ivory you have -- there are lots of hard white materials that didn't come from an African elephant. The US Fish and Wildlife Service has an ivory identification guide, with photos, flowcharts, and recommended lab procedures. The most relevant to bassoonist is identifying elephant ivories, which can be recognized by what are called Schreger lines in cross sections of the dentine. Here are pics of what they look like in elephant and mammoth:


Now, most of the rules are about elephant ivory, so if your bell ring is made of steel, or synthetic, or tagua nut, you're fine. If it's an especially good simulation of elephant ivory, you may want to keep documentation with the instrument, in case questions come up. I don't know if bassoon bell rings are ever made of animal ivories not from elephants, but if they are, you should be able to identify the species using the flowchart and read up on the rules.

Mammoths are an interesting case. Mammoths aren't endangered, they are extinct, and have been for 10,000 years. So while there is a reasonable amount of mammoth ivory around, it is not covered under CITES and related rules: there's no risk to the species, since it's already dead. Look at the picture, though: it's gorgeous. I don't know if mammoth has ever been used for bell rings.

As a practical example, here's an end view of a bassoon bell: 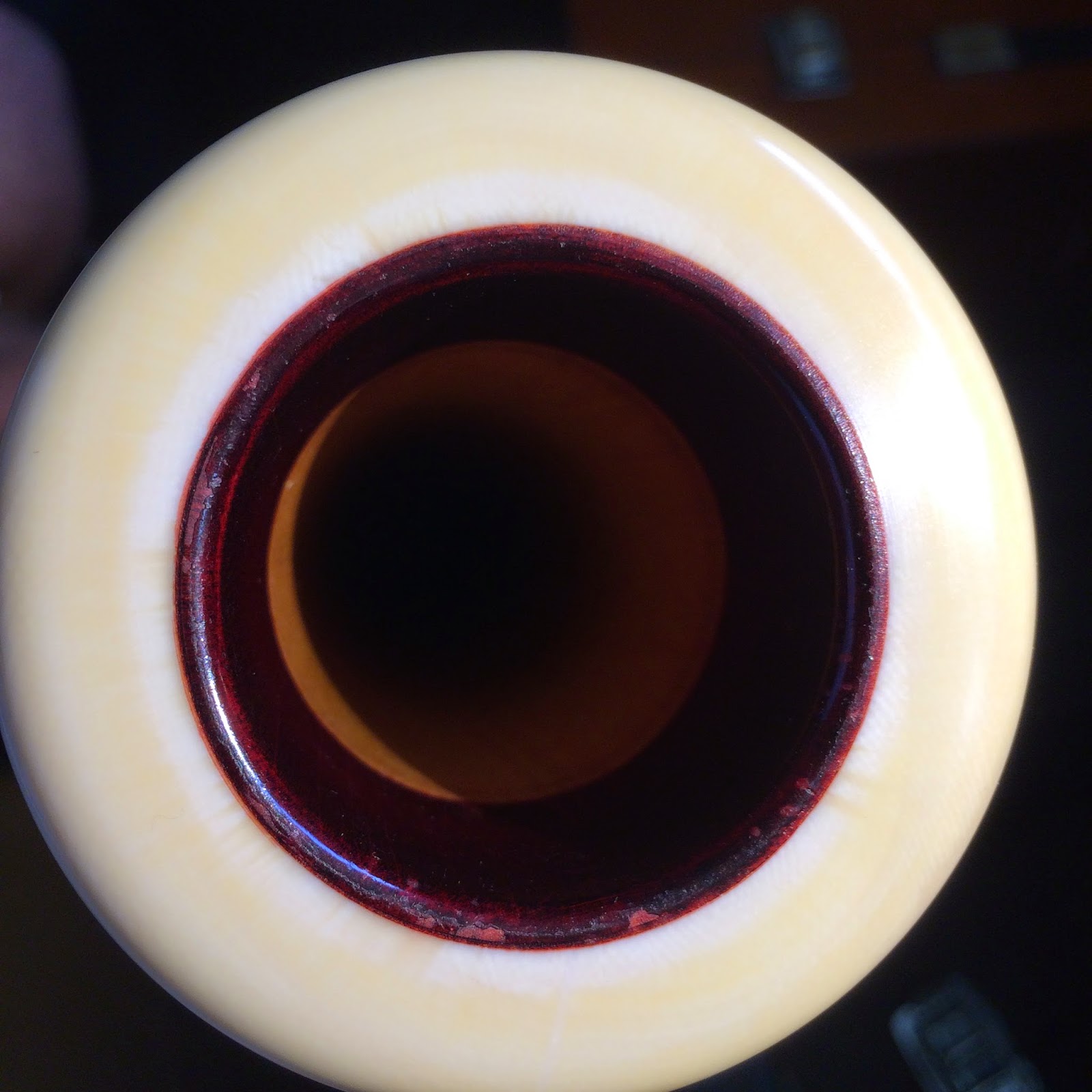 End view of a bassoon bell 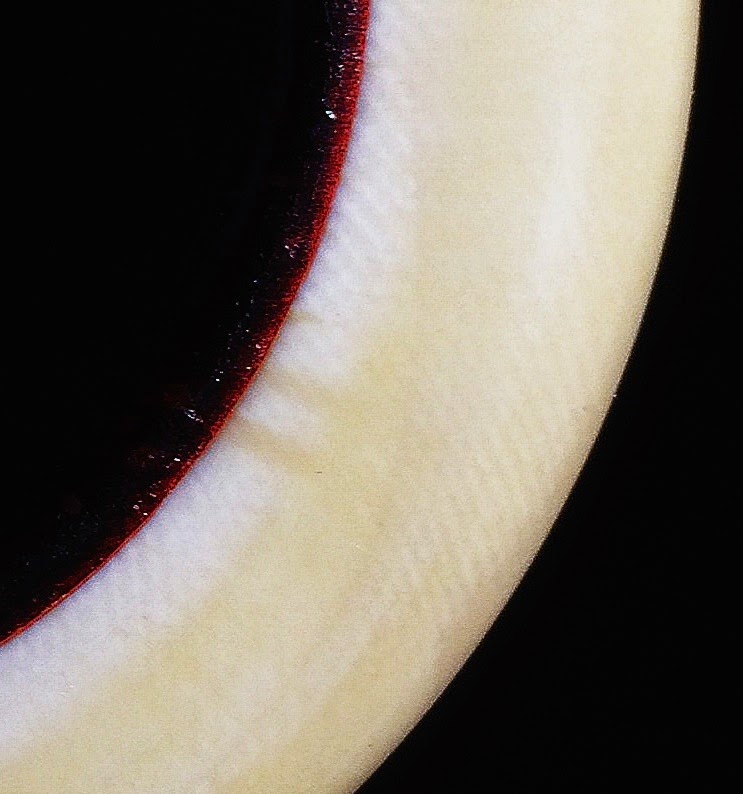 Schreger lines are definitely present, which means elephant or mammoth. It's not so easy to tell, since we don't have the whole cross section to look at, but to my untrained eye the angles look more like the elephant picture than the mammoth picture. So: probably elephant ivory.

Now we're into complicated rules territory. If the material in question was removed from the wild prior to Feb 26, 1976, and there is sufficient documentation of that fact, various pieces of paper can be gotten to show to interested officials. The US forms for musical instruments start here. If you travel frequently with an instrument, bring as much paperwork as possible to impress the border officers with your diligence and awareness. The League of American Orchestras has more reading here. No one wants to end up with their instrument in government impound or worse.

My son was explaining that the standard modern bow, the recurve bow, was in fact only invented in about 1750. Before that, the bow allowed triple and quadruple stops to be played solid, instead of broken as in modern performance practice. This video shows a selection from a Bach cello suite being performed with a historical bow. Recurve bows allow the normal types of staccato we're used to hearing these days, however.
Posted by TFox at 8:56 PM No comments:

This is my bassoon 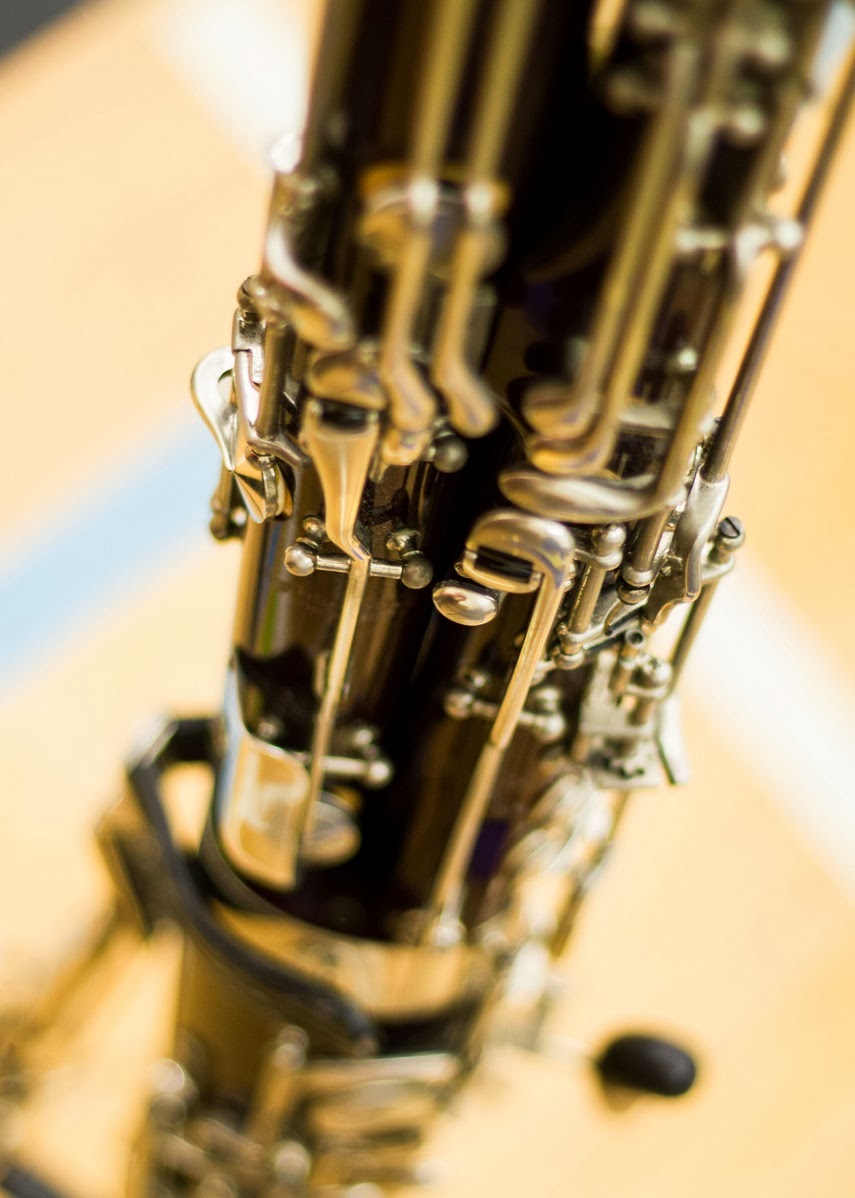 Taken by a photography friend of mine after rehearsal last night. Very arty, I think. Still, you can see some of the odd keywork choices.

Gustav Holst wrote a wind quintet! It's not well known, and was in fact lost for many years. Written in 1903, the manuscript was rediscovered in 1978, and it received its official world premiere in 2006. More than a century between composition and performance, that must be some kind of record. Raymond Head seems to have edited the definitive edition, which is available from his web site.